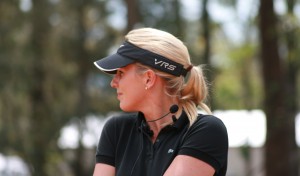 In 2011, Australian dressage enthusiasts at the Sydney CDI were delighted by the classical, correct and sensitive riding style of the German Guest Rider who had come to ride and judge the finalists in the HHSA NSW Young Horse championship. Despite the fact she was getting on these horses for the first time, in front of a packed stadium of delighted onlookers, this rider had the horses relaxed and attentive within seconds and it was a joy to watch such young horses accept a different rider so readily.  The rider was, of course, three time Bundeschampion Anna Sophie Fiebelkorn.

Anna is a specialist young horse trainer who worked for many years as an auction rider for the Hanoverian Verband where she presented many of the top priced horses at the auctions in Verden. She opened her training establishment in Bartelsdorf Germany in 2006 and now has a waiting list of horses to join the talented youngsters and rising FEI stars currently under her tutelage. Previous success stories of Anna’s include Bundeschampions Callaho’s Benicio, Bennetton Dream and Imperio (who was also vice-world champion). 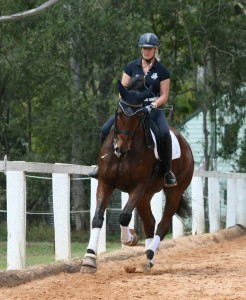 Fortunately for Australian riders, Anna appears to be as enamoured with our country as we are with her, and she has since returned as Guest Rider at the HHSA NSW Young Horse Championships in 2013 and again in 2014. On each of her visits to Australia, Anna has conducted hugely popular clinics which demonstrate her skill as a trainer as well as a rider. It is a privilege for our riders to have the opportunity to be taught by such an experienced and acclaimed young horse competitor, and Anna has developed a keen following from a group of riders who are benefitting hugely from these training sessions.

Anna’s style of training involves each horse being treated as an individual, and finding the key to encouraging each horse’s co-operation and developing its relationship with the rider to inspire the horse to work to its maximum ability for its rider.  In the training sessions, Anna is quick to identify issues and areas that could be improved with each horse, and she has an extensive stockpile of solutions and exercises to help each horse and rider, developed from her experience with so many horses and the guidance she has received from her mentors, Hans-Heinrich Meyer zu Strohen and German Olympian Heike Kemmer. Underpinning all of this is a strict adherence to the training scale, and an approach that is classical and fundamentally correct.

Horses in Anna’s clinics are not worked behind the vertical and riders are encouraged to trust their horses and allow their horses to find the contact and carry them. Some riders were told to lengthen their reins and allow the horse to seek contact with the bit, allowing them to develop power and expression in their paces by having a loose and swinging back.

Anna has been impressed with the continual improvement of the riders that she has instructed over the last four years, and to the delight of her regular clinic attendees, is keen to come back on a more regular basis in the future. Anna’s students are hugely appreciative of Anna’s ability to take them back to the basics to improve the foundation of their training. After talking to these riders, there was a recurring theme that everything Anna spoke about or worked on with the riders in the lessons was just so simple- the difficulty only lies in mastering these simple things. Thus inspired, Anna’s students eagerly await her return in the not too distant future.