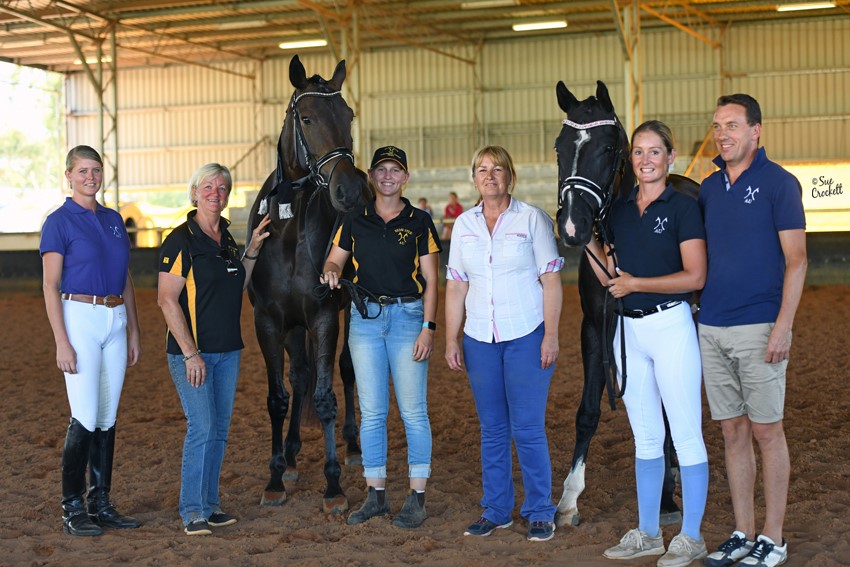 Having been asked to be the evaluator for the Hanoverian Horse Society of Australia’s 2018 Foal & Mare Tour at last year’s Hanoverian International weekend, I flew out mid-February for 3½ weeks of judging, travelling and staying in breeder’s homes. I thought that this would be a great way to see lots of Australia but more importantly provide a great insight into the horse community and their breeding programmes.

Perth in Western Australia was my first stop and having left England at 2°C it was a shock to land at 6pm to find that it was still 41°C but a very dry heat. It was interesting to see how these beautiful horses coped so well in such hot dry conditions with most having access to field shelters and having their paddocks irrigated to ensure that the grass grew. During the two day show at Narbethong Equestrian Park, Michael Procter’s elegant filly by Benicio out of St Pr St Red Hot Chilli by Rotspon received high marks for movement and well-deserved gold award. Additional gold awards went to Michael’s Vitalis / Hocadel foal.

As well as Gabby Adam’s powerful moving filly, Foxleigh Baci by Bonds out of a Ferro Rocher mare. 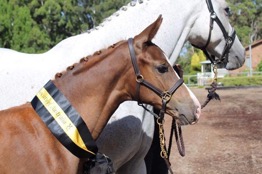 The next leg of the Tour meant a six hour overnight flight across Australia to a green and tropical Cairns which proved equally hot but very humid. The first day involved a mare performance test with 3 lovely horses owned by Linda McKinnon. In their climate it is hard to work the horses so we had to stop and cool them down between riders and the free jumping. The first was a 3 year old by His Highness / Rocaille which was a little green but showed real ability over the jumps, next a 4 year old Don Index / Lanthan that scored well for its rideability and uphill canter, and lastly a 5 year old Regal Diamond Days Dancier / Londonderry. This very sweet mare scored highly for rideability and achieved Premium candidate mare status. The next day involved travelling to the ‘Atherton Tablelands’ and visiting Linda’s farm and evaluating 3 lovely foals before having a day off from the horses during which I took a boat trip to see the Great Barrier Reef and also a park with huge saltwater crocodiles! 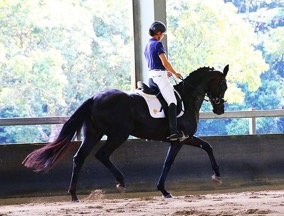 Next was a short flight to Brisbane where I met the very charming Bev Chugg, whose son, Chris, has been on the Australian Olympic Show Jumping teams. She drove us from Brisbane to Main Beach on the Gold Coast stopping to classify several foals and mares en route including Bev’s elegant Hotline mare. We stayed overnight on the coast and the following morning we walked along the beach to Surfers Paradise to see all the Commonwealth Games preparations. That afternoon, we were picked up and driven over Tambourine Mountain in Queensland’s hinterland to several studs in Queensland.

On a day of very hot sunshine and showers, I attended a well organised day at Remi Stud where 19 foals presented by Cheryl O’Brien and her team. Awarded a gold sash was the outstandingly elegant filly, Remi Foressence, by For Romance out of her champion Quarterback mare; Cheryl said she’s keeping this one. The other gold went to the chestnut filly Radience B owned by Anita Barton, this was by Riverside out of a Lauries As mare. A highlight of the day was when Cheryl also presented a mare family consisting of Premium Remi Destinys Child and her two premium daughters by Lauries As and Quarterback, very modern beautiful family. Wonderful hospitality was laid on with drinks and BBQ which was enjoyed by all. 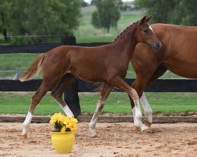 At the Gatton arena, we had 9 mares put forward for their performance test; all were well prepared and most showed ability in the free jumping. Rideability is key in these tests, and our test rider, Beth Carter, was impressed with the attitude of these young mares. Top marks went to Janette and Kevin Lewis’ Benchmark Dream On by Don Index / Rotspon and Cheryl O’Brian’s Remi Love Child by Lauries As / Fishermans Friend. Seven out of the nine mares achieved marks to make them Premium mare candidates showing the depth of quality in the local breeding stock. We finished the Queensland leg of the trip with Janette and Kevin Lewis, who had a gold sash filly in their quality and powerful mover Benchmark Freedom by For Romance / Wolkentanz 1. 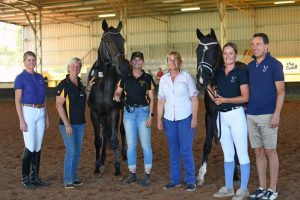 Off to Newcastle and into New South Wales where we met Nicole Davenport, for 2 days of driving to see horses but somehow also found the time to look at the wine available in the Hunter Valley. I was particularly impressed by Sheridan Ashwood’s gold sash foal that was bred by Madonna Hedberg by Fiderfurst and out of her Totilas mare. We also saw our first gold Rhineland foal by Prestige VDL out of a Rhodium mare.

Another flight, this time a small region ‘hop’ to Wagga Wagga in New South Wales, for a couple of days of visiting more well-presented foals. On the final day, the Whiting family hosted a show where amongst the horses presented they got a gold sash for their Matavia Bon Accord, a very smart foal by Bonds out of a Pommery mare. The evening ended with another BBQ and friendly horse chat with Rachel Whiting and family.

Following a great visit with Jade at SkyFall in Albury, I boarded my last internal flight and was off to Melbourne in Victoria, where I was met by Gayle Maule. In the next 4 days we racked up the most miles (1000 miles!) on our tour! Victoria is a beautiful state still hot and sunny but with cooler nights. Another Mare Performance test with a very beautiful black mare Von Cheri by Vitalis, owned by Silvana Di Teodoro and Danielle Giosserano, Cheri was rather green but jumped really well and blossomed under the riding of our test rider Callum Buczak, scoring well for rideability.

Off to Hollingrove Stud to visit Bruce & Debbie Williams and to award another gold award for their smart Don Ameche foal by Don Index / Ampere mare. Apparently, this is the third foal to get a gold award out of this Amaris mare. During my last ‘foal stop’ on this Tour, Kate Sheffield’s filly foal Everton For Keeps also scored gold, by Furst Wilhelm / Lord Sinclair. 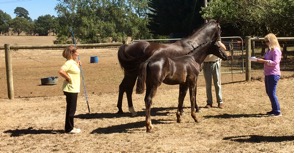 Best Hanoverian on Tour was Benchmark Dream On winner of the performance test owned by Janette and Kevin Lewis. 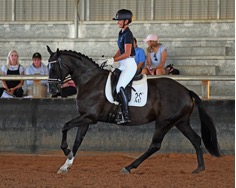 Off to UK with a million great memories, a whole group of new Aussie friends, and an increased respect for the great understanding and passion that goes into the breeding of Hanoverians in Australia. Thank you all for making is such a pleasure and privilege to see all your horses.