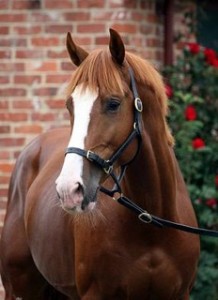 “Outstanding stallion, for both competition and breeding. 2004, 170cm, chestnut stallion by the legendary Heartbreaker out of a Hamlet (sire of Hickstead) x Ramiro Z mare. 3/4 brother to Heartbeat (by Heartbreaker out of Elly by Ramiro Z), 2014 Danish Warmblood Stallion of the Year. Euro Sport Heartbreaker has competed with wins to 1.50m and has definite World Cup potential.

Easy to ride, and very well educated on the flat. He is licensed with the Hanoverian studbook, and also the NZ Warmblood Studbook, ranked ‘Principal’. At his Hanoverian Licensing in February 2015, the following report was given: Euro Sport Heartbreaker had achieved the right to be inspected for licensing through his performance in Showjumping at the prescribed level. Hartmut Wilking was impressed with his jumping technique and looseness through his whole body. He has a balanced and correct foundation. He has a really calm temperament and is quite a handsome fellow. His sire Heartbreaker is one of the top stallions in Europe. Hartmut also commented that Euro Sport Heartbreaker would be a desirable breeding stallion even in Europe. His oldest progeny are 6 yr olds and showing big potential. They are of an uphill build, with excellent canters, great ride ability and impressive jumping ability. Icebreaker MP placed 2nd in the NZ National 6yr old title class this year.”

ES Heartbreaker has demonstrated his fantastic temperament in all respects. He is ridden solely in a snaffle bit and has never worn or been competed in any performance enhancing boots.

In March 2013, ES Heartbreaker’s 3⁄4 brother Heartbeat (by Heartbreaker from grand dam Elly (Ramiro Z)), was named 2013 Danish Warmblood Stallion of the Year in Herning, Denmark. Heartbeat himself competes at 1.60m level and received the following report at his presentation. “In the Young Horse Championship he scored maximum points as he received eight times 10. Heartbeat made his debut in international jumping in 2008 and has booked numerous placings and victories. He has sired champion and premium stallions as well as highly decorated mares.”

Said Poul Graugaard, chairman of the licensing commission, “He is bred in Holland and came to Denmark as a 3-year-old with an impact few before him has mustered.”

The only blood separating ES Heartbreaker and Heartbeat is that of 1.60m SJ Hamlet, sire of legendary Hickstead!

Sire Heartbreaker’s achievements in both his show jumping career and as a sire are endless. He has topped the Jumping Index for Belgium and Holland for many years, and currently leads with a phenomenal score of 184 points. Heartbreaker has been named ‘Ambassador of the Belgium Warmblood Association’ for having the most offspring in the top 100 of the World Breeding Rankings.

Euro Sport Heartbreaker’s dam Nufrieda competed to 1.40m as a 7 year old before being put in foal. Nufrieda’s talent was no surprise given the success of her family. Her dam Elly is by Sire of the Century Ramiro Z, and carries the highest predicate for mares in the KWPN of Prestatie. Elly is from the same mare as international 1.60m show jumper, B.Jonggor.

‘KWPN Stallion of the Century’ Nimmerdor, features on both sides of Euro Sport Heartbreaker’s pedigree. Nimmerdor competed to 1.60m in the show jumping arena and was selected for the 1984 Los Angeles Olympic Games Dutch Show Jumping Team. However his owners elected not to risk sending him. He has produced countless world famous progeny and consistently features in the pedigrees of some of the world’s best horses.