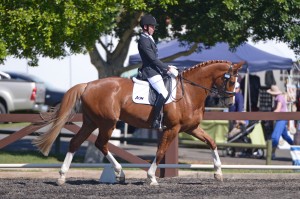 Congratulations to Rachel & Adrian Whiting and Sharon Cox,  who own Franziska imp. Winner of the Prydes Easifeed  Leaderboard for 2014.  Franziska imp. is a 6 year old chesnut mare by Furst Nymphenburg and was imported during the clever initiative run by the Hanoverian Horse Society of Australia to import fillies into Australia from Germany.  Franziska imp. was very capably ridden by Ruth Schneeberger from South Australia.  Ruth has been Franziska’s imp. competition rider and together they had four wins and seven placing’s at for their winning 47 points.  It is lovely to see a mare successfully competing.

The Prydes Easifeed  Leaderboard takes results from selected Novice and Elementary tests in Western Australia, South Australia, Victoria, New South Wales and Queensland, with the overall winner receiving a tremendous prize of a pallet of Prydes Easifeed.  A big thank you to Prydes, who have been a supporter of the HHSA for seven years now and are one of our main sponsors.

The third horse is Revalentino,  an imported gelding by Rubinero, owned by Joanne and Courtney Barbera of Queensland.  Revalentino imp. and Courtney are on the Dressage Queensland 2015  Young Rider Senior Squad.

Congratulations again to Franziska imp., her owners and rider, and all horses that made it on the leaderboard.