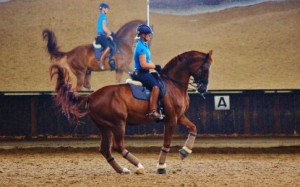 Alabaster represented Australia at World Equestrian Games in 2010 and went 22nd in world to gain a start in Special on day 2, not a common occurrence for an Australian Horse, and then represented Australia again at the World Cup in 2012 and scored over 70%. Under new rider Hayley Beresford, he scored 72.4% at Grand Prix at the 2012 4 star in Oldenberg, the highest score ever for an Australian Horse, and also on long list to compete for place in WEG team for Australia in 2014. This gained him a start in the Meggle Cup Final, the first ever Australian Horse to be granted this honour. Jaybee Alabaster is the sire of Rachael Downs’ super young FEI winning horse Albert, Roger Fitzhardinge’s Amerigo, Justine Greer’s Jaybee Angelina, Wendy Halma and Greg Pratts Jaybee Aloisi (exported to Germany), and many others.

Alabaster’s progeny exhibit the same super movement and trainability of their sire.